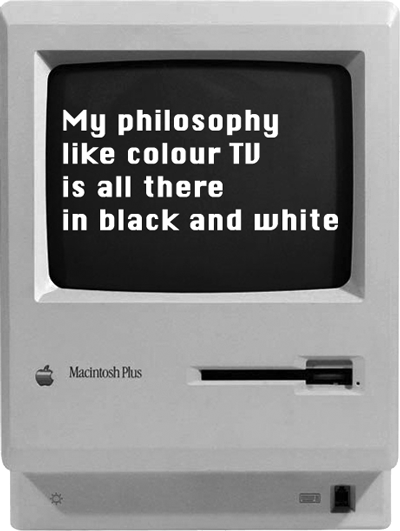 This collection of quotes started life in the early nineties for an After Dark™ screen saver module. The quotes had to be short enough to fit on a 9" Macintosh screen and pithy enough to warrant the trouble of typing them in. People requested copies but, at that time, there was no After Dark for Windows and only Macintosh users enjoyed the collection.

To allow a wider distribution, a slow conversion to a text file was started (there was no easy way of exporting the quotes from After Dark) which in 1997 became this website. It was created using plain HTML which made updating a laborious process. It had a quite a bit of success but interest tapered off as there were no new additions. In 2009 it was revamped to use a MySQL database to provide flexibility, a search option, and to slowly include new quotes found over the previous twelve years.

The best audience is intelligent, well-educated, and a little drunk.
Alben W. Barkley (1877-1956)

Astronauts use Linux because you can't open Windows in space.
Anonymous

A yawn is a silent scream for coffee.
Anonymous