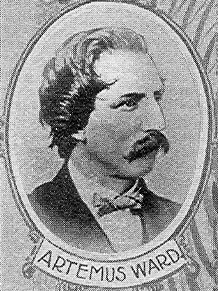 Just one quote by Artemus Ward

Charles Farrar Browne (April 26, 1834 - March 6, 1867) was a United States humour writer, better known under his nom de plume, Artemus Ward. At birth, his surname was 'Brown.' He added the 'e' after he became famous.

❝Why is this thus? What is the reason of this thusness?❞[+]